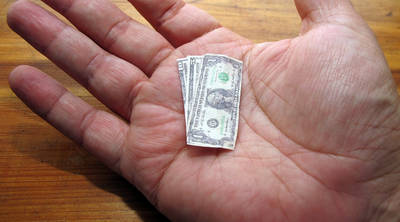 A web sourced calledMarketplace.org showed some interesting sources and statistics about economic anxiety here in the US. They go on to show and say,
“We’ve learned that 28 percent of Americans are afraid of not being able to pay their mortgages — that’s up from 10 percent a year ago.And we’ve learned that almost half of all Americans with full- or part-time jobs – 48 percent — say they’re working “just a job” and not part of a career development path.”
Some facts from their website show:
The Economic Anxiety Index® is now 36, up 20 percent from a year ago.
You can read the full story here: https://www.marketplace.org/2016/10/13/economy/americans-economic-anxiety-has-reached-new-high
That is quiet a scare and definite cause for anxiety.  So what can Americans do about it?
Is the truth really in who becomes next president? Many sources online show that whoever is president will not effect growth of the economy while in their term or terms.
Soucefivethirtyeightsays, “Presidents, in general, have far less control over the economy than the public often thinks. It is impossible to know for sure, but it is likely that the housing boom and bust would have played out much the same way under President Gore as it did under President Bush, and it’s likely that the recovery would have been just as long (and just as disappointing) under President McCain or President Romney as it has been under President Obama.But that doesn’t mean presidents have no power over the economy at all, or that their policies are unimportant. Indeed, presidents, along with Congress, can exert profound influence over the economy, for good and ill. It’s just that their true impact is rarely what gets talked about in party conventions or on the campaign trail. True presidential impacts are often invisible — as much about what doesn’t happen as what does — and become clear only years or even decades after they leave office.”
The Gold “Nay-sayers” and Enthusiasts have been almost a 50/50 split in my opinion, but as global economics progress, i see more and more news sources leaning on positive notes of the importance of gold investments in the long run. Perhaps the tides are finally changing as more people wake up. Seeing as statistics show less and less faith in the government and their economic decisions – i can only speculate that this may be the foundation we have been waiting for.  As i watch the markets i see the fluctuations of gold rises and falls, yet it still seems to stand the tests of time to constantly rise and never fall as the purchasing power of the US Dollar and other fiat currencies. Still proving it is a formidable investment. Maybe that is why many successful portfolios follow the belief in the 25/25/25/25 investment plan. This means splitting your investments into four areas. Those areas are real estate, cash, stocks, bonds and mutual funds, and precious metals like gold. In our professional opinion this plan will keep you set and safe for life.
– Admin