Total US Debt Is Back To Its Great Depression Peak 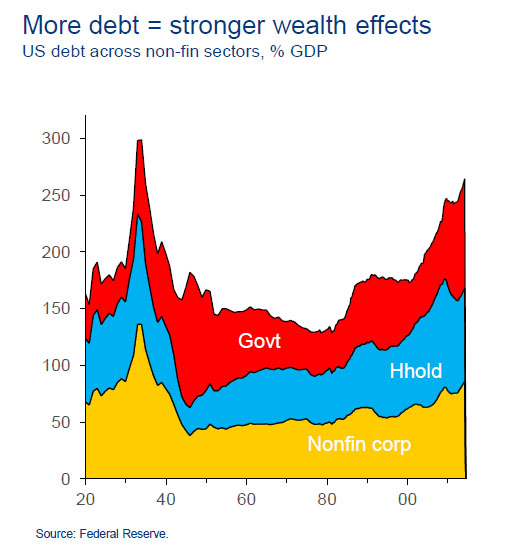 Long before McKinsey released its 2015 report which showed that, contrary to repeated, erroneous analysis and propaganda media reports, not only has the world not deleveraged at all but has added some $60 trillion in debt since the crisis (a number which mostly thanks to China is about $5 trillion higher over the past year) we warned that the primary reason why the world is unable to grow is because of an unprecedented mountain of debt that keeps growing. In fact, since the growth – and monetization – of debt by central banks is the critical precondition to keeping asset prices artificially inflated, it was also the case that global debt would keep rising indefinitely, at least until such time as the world finally hits its credit limit, a critical topic discussed extensively by Citigroup’s Matt King in October of 2015.
Which leads to the question: based on historical analysis just where is the debt capacity for the world’s biggest creditor, the United States, and what happens when said capacity is hit.
The following chart from Citi shows the last century of US non-financial leverage in context. As of this moment, consolidated US non-fin debt/GDP is about 275%, or roughly where it was US when the great depression stuck.
For those curious about the "tipping point" threshold levels, keep an eye on 300% – that’s when the system collapsed last time leading to a devastated economy.
The second question: what happened next to unleash the greatest deleveraging in the history of the US? Why World War II of course.
Sourcehttp://www.zerohedge.comclick here