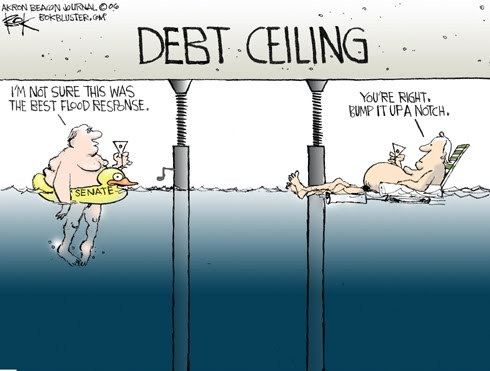 1. The US debt ceiling will be debated soon and signs point towards a messy outcome.

2. Recent economic data have been weak, confirming our thesis that US economic growth is slowing and will not be reversed until a recession is acknowledged.

Excessive debt has a way of catching up with people and institutions, and the first true test for the US government may be at hand. Congress was expected to raise the debt ceiling by October or else Treasury could not fund all the government’s programs and current obligations. Yet talk of Trump tax reform in 2016 may have given taxpayers incentive to defer their liabilities. As a result, Treasury received about 3 percent less in revenues than expected, accelerating the timetable to debate and raise the debt ceiling. Progress on raising the ceiling will unlikely be made in August, as Congress is in recess.

Meanwhile, the political atmosphere in the Republican Party has splintered further under President Trump. The conservative wing, which tried to block raising the ceiling in the past, has signaled it will again dig in its heels to force the government to begin balancing its budget. Though it caved in the past, the conservative caucus’ resolve should not be doubted this time, judging by its will and ability to so far block health care reform that does not absolutely repeal the Affordable Care Act.

Treasury Secretary Mnuchin has stated that the Department has options if Congress does not raise the ceiling, but has not been forthcoming with specifics. If a cash flow shortfall develops in the fourth quarter, principal and interest payments on Treasury debt would be prioritized so that the government would avoid default. Payments to government contractors, however, would be delayed. If the ceiling is not raised in due time, then government contracts would have to be re-structured and services pared back.

There would be meaningful economic consequences were the US government to become unable to pay its bills on time. The most palpable would be a reduction in output growth. Government spending accounts for about 21 percent of US GDP. Curtailing payments to government contractors would reduce GDP growth, which is already lethargic and decelerating (see Declining Economic Prospects, below).

Since the financial crisis, government outlays as a percent of GDP have fallen while real (inflation-adjusted) GDP growth has struggled to break above 2 percent. Real GDP growth of 1.6 percent in 2016 does not provide a comfortable cushion to protect economy growth from falling into negative territory.

The curtailment of government payments to contractors could also have an inflationary impact on the general price level of goods and services, as contractors seek to overcome diminished sales volume with higher sales margins.

But perhaps the most obvious and immediate impact of suspending government contracts and payments would likely be the optics associated with American global leadership and the US dollar’s hegemony, which have kept its exchange rate stronger than it would otherwise be. If Congress were to fail to raise the debt ceiling, the dollar would likely fall vis-à-vis the currencies of American trade partners, which would help US exporters and hurt US consumers, as prices of imported goods would rise in dollar terms.

We have argued that US (and global) output growth would continue to fall and ultimately contract into recession, and so our antennae has been sensitive to financial events that could potentially act as catalysts for a public shift in expectations – from continued slow growth to contraction. The impact of diminished US government spending would immediately raise the specter of recession among economists and policymakers, and would likely have an immediate impact on asset prices.

As it stands, the US economy is not a model of strength and does not seem to have improving prospects, an economic outlook that is becoming increasingly difficult to challenge. June retail sales data released Friday disappointed consensus expectations meaningfully, dropping for the second month in a row. Economists often emphasize trends over specific data points; however, Friday’s report was very weak across the board. As consumption accounts for nearly 70 percent of GDP, estimates for second quarter growth are in the process of being revised lower. The economy grew only 1.4 percent in Q1. Previous estimates had been as high as 3 percent for Q2, which reflected excessive optimism in our view. One need only consider the accelerating shift in consumer behavior towards vastly more efficient online shopping and delivery to understand the forceful downward impact on GDP.

Meanwhile, an expected rebound from a dismal Industrial Production report also fell flat on Friday, as US industry only gained back half of its precipitous May decline. Year-over-year growth slowed for the first time since January. Lower lows and lower highs makes a worrying trend. Zero Hedge noted the irony: ““Industrial Production remains 1.4 percent below its Nov 2014 peak, but the Dow Jones “Industrial” Average is up 21 percent since then…””

Consumer prices are certainly not signaling demand growth – in fact, just the opposite. As graph 3 below shows, median goods and service prices are rising at the lowest rate since 2010 – 1.1 percent. This suggests that an imminent rise in overall inflation – the Fed’s economic rationalization for normalizing rates and its budding attempt to reduce the size of its balance sheet – is not being borne out by the data.

It is also not surprising that “soft data” measuring consumer health has begun to roll over. The Bloomberg Consumer Comfort Index has weakened in the last two weeks and the University of Michigan Consumer Confidence index has dropped to levels last seen prior to Trump’s election. The honeymoon may be over.

The latest economic data raise questions about the robustness of the US economy and the implied optimism expressed in equity markets. We have repeatedly questioned whether the Fed’s current rate hike regime was data driven, arguing it’s motivation was more related to maintaining a strong dollar to attract global capital in a weakening global economy. If the rate of inflation does not begin rising soon, the Fed will be left without a reasonable economics-based argument for hiking rates.

The Treasury bond market rallied on Friday following the slew of weak reports. As you may know, one of our highest conviction trades has been to own long duration Treasuries and to be short high yield credit in anticipation of a slowing US and global economy.

A messy debt ceiling debate (or worse, the failure to raise it) in combination with a weakening economy could be toxic for the US and global economies. Financial assets would likely adjust swiftly and substantially as the economic tide goes out. The dollar would also be prone to weaken abruptly in such a scenario and the Fed would find itself in a most precarious position: either continue its rate and quantitative tightening regime or reverse its normalization policy to be accommodative in the face of economic weakening. The Fed would have no choice but to respond to market weakness by trying to support asset prices, which support liability values, which, in turn, support bank capital values.

Gold and cryptocurrencies would likely benefit from dollar weakness against a backdrop of slower US and global output growth, especially if the Fed is shown to be ineffective in predicting economic outcomes and unable to protect against bad ones. The magnitude and duration of the rise in the exchange rates of alternative money forms vis-à-vis dollars and other fiat currencies would depend on whether the Fed and other central banks would be able to elicit confidence in savers and investors that the public float of the currencies they oversee will not be hyper-inflated. They succeeded from 2009 to the present.

We do not have an opinion as to how broad equity market indexes might react following an initial swoon. As we have seen, equity market benchmark pricing seems to have a life of its own when the public perceives underlying economic and financial stability. If the perception of stability is reinforced, then they might again begin a recovery phase, as happened from 2009 to the present. If not, then they would likely revert to pricing based off the bottom-up revenue and earnings of their components. We think alpha in the equity markets would be generated by businesses that produce positive real returns on capital.